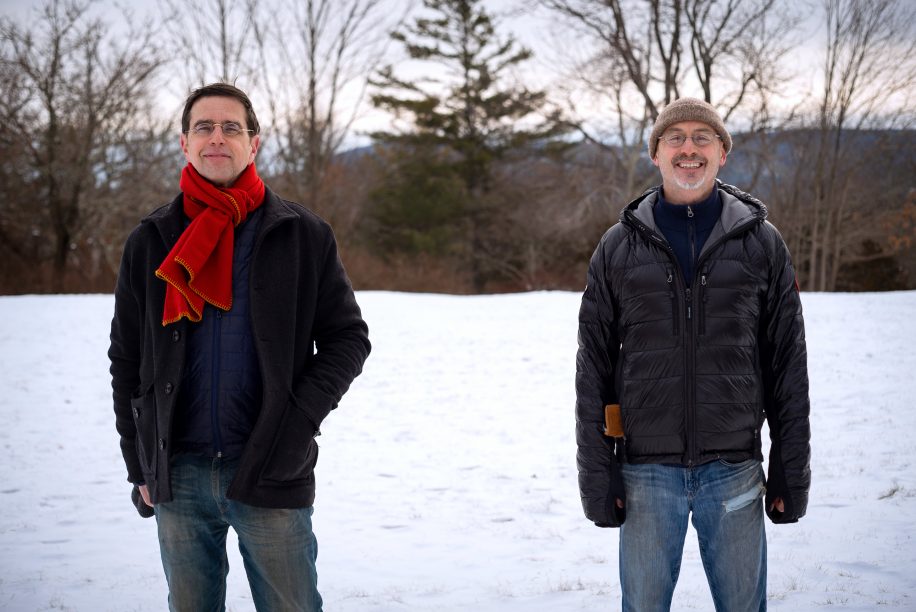 Following the retirement of founders Steve and DeDe Leiber, Upstate Films introduces its new leadership. Paul Sturtz and Jason Silverman have been named co-Executive Directors of the storied not-for-profit organization, which has been bringing provocative cinema to the Hudson Valley since 1972. The two were selected after Upstate Films’ board of directors conducted a national search process. Steve and DeDe Leiber will continue with the organization as treasured Directors Emeriti and consultants through Upstate’s 50th anniversary in spring 2022.

“We are thrilled to bring Paul and Jason onboard,” said Susan Goldman, chair of Upstate Films and a co-founder of the organization. “Their experience in the field of independent cinema is extraordinary. More importantly, their work in building community through the arts resonates deeply with Upstate Films’ history and mission. Though it may seem crazy, as theaters have been closed and the future so uncertain, the Board is very excited by the vision and possibilities our new Directors bring.”

Paul Sturtz is a co-founder, with David Wilson, of the Ragtag Film Society in Columbia, Missouri, a now-legendary arthouse theater that became the basis for the True/False Film Fest, a nonfiction festival that has received international acclaim. The Los Angeles Times called True/False “the most important documentary festival in America” and The New Yorker described it as “the epicenter of creative cinematic nonfiction.” The festival was also known for its deep community collaborations and for helping to revitalize downtown Columbia. Sturtz has also worked as a journalist, served as a city councilor in Columbia and was recognized for his work with an honorary doctorate from the University of Missouri. Full bio here.

Jason Silverman served as the artistic director of the Taos Talking Picture Festival, named one of the world’s top ten festivals, and as the Cinematheque Director at the Center for Contemporary Arts, Santa Fe. He also is a former journalist, including 15 years of freelance work for Wired. His 2015 documentary film SEMBENE! premiered at Sundance and Cannes and was named one of the top ten films of 2015 by New York Magazine. He has served as a curator or producer for numerous arts organizations and has been a key member of the Telluride Film Festival staff since 1991. He has been recognized with the Santa Fe Mayor’s Award for Excellence in the Arts; and through the proclamation of “Jason Silverman Day” in 2019 by the City of Santa Fe. Full bio here.

Steve and Dede Leiber have led Upstate Films from infancy to this transition, 49 years later, and are excited about the organization’s next chapter.

“We’ve been working towards retirement and passing the torch for quite some time,” said Steve Leiber. “We feel confident that we have found new leaders who, with their deep background in cinema and community, are perfectly suited to sustain Upstate through the challenging pandemic and to guide Upstate into the future.”

“It’s a scary but exciting time for everyone in the film business,” said DeDe Leiber, Upstate Films co-founder. “We are grateful that Paul and Jason have decided to take on this challenge, and we are excited to work together to ensure that our organization—our baby—survives and thrives.”

Upstate Films currently operates theaters in Rhinebeck and Woodstock. As one of the original small-town arthouse theaters in the country, the organization has a national reputation for finding and presenting the best new and restored films, and in building memorable events, including the Hudson Valley Film Festival, focused on the role of the screenwriter; the American New Wave series; and, since 1972, by bringing filmmakers and artists in person to share their films. The organization also has at times distributed films that they loved—the Oscar-nominated THE WEATHER UNDERGROUND, the beloved UNDER THE SUN, the Emmy-nominated FOLLOWING SEAN—out of a desire to make the films more readily available. The organization has been a leader in arts-based education, launching, with FDR High School in Hyde Park in 1987, a seminal program that uses films and filmmakers to teach history and English in A.P. classes. The program continues to this day.