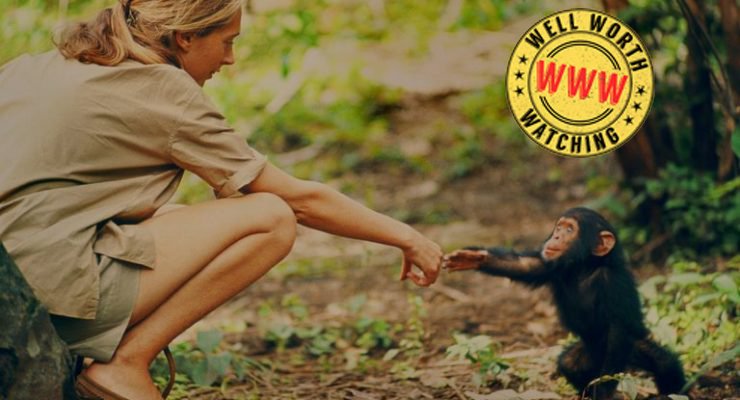 Brett (The Kid Stays in the Picture, Kurt Cobain: Montage of Heck) Morgen’s latest, a terrific time travel film about primate researcher Jane Goodall who lived in the wild with chimpanzees, is drawn from over 100 hours of never-before-seen footage that had been tucked away in the National Geographic archives for over 50 years.

To make the film, Morgen and his team patiently catalogued the hours of silent footage shot by Hugo van Lawick of the young Jane Goodall living with the chimps in the outer reaches of Tanzania’s Gombe Stream National Park. One of his discoveries was watching the love blossom between Hugo and Jane. Meanwhile her pioneering research on chimpanzees revolutionized our scientific understanding of the natural world. As Brett Morgen explains “This is not a film about science… This is a love story about a woman and her work. From the first conception, it was intended to be a sort of cinematic opera.” It was famed anthropologist Louis Leakey who chose Jane, his 26 year old secretary, an untrained scientist with no preconceptions, to live with the chimps in the wild. Set to an orchestral score by legendary composer Philip Glass, Jane offers an unprecedented, intimate portrait of Goodall—a trailblazer who defied the odds to become one of the world’s most admired conservationists.