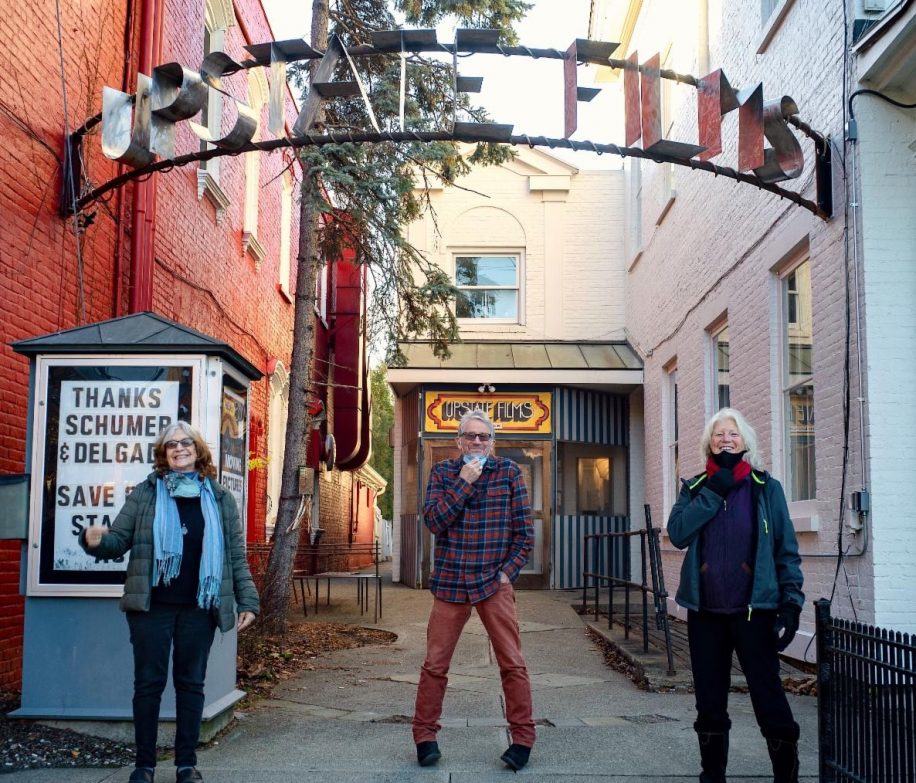 Steve and DeDe Leiber, who founded the legendary independent cinema Upstate Films in 1972, are stepping down as co-directors, effective January, 2021.
The two will assume the roles of directors emeriti. The transition process is well underway – Upstate Films board of directors has hired new leadership and will introduce and announce the new leaders in early 2021.
Steve and DeDe, with current board president Susan Goldman, started the nonprofit organization in 1972. The goal of this trio, all of whom were still in their early 20s, was to create a community-oriented moviespace in the Hudson Valley. They revived a rundown space, the Starr Theatre, built in 1927, in Rhinebeck, New York. A once-thriving district, Rhinebeck’s downtown had fallen upon difficult times. Upstate Films’ first program included live performances, a screening of a Buster Keaton short and a screening of the Marx Brothers’ DUCK SOUP.
In the 48 years since, the organization has presented more than 4,000 films from 100+ countries, hosting more than 1.5 million ticket buyers. Many classics of the genre, including hundreds of Oscar nominees, received their regional premiere at the theater. Scores of visiting film artists have brought their films to Upstate Films, including Jim Jarmusch, Julia Reichert, Steve Buscemi, Shirley Clarke, Jonathan Demme, Emile De Antonio, Karyn Kusama, Ethan Hawke, Debra Granik, Ismail Merchant and James Ivory. Esteemed critics and scholars including Pauline Kael, J. Hoberman, Judith Crist, Stuart Klawans, and Thelma Adams have presented programs as well.
“Steve and DeDe have done it all,” said Susan Goldman, the Upstate Films board president. “Beginning with a modest program of American classics, Upstate soon pivoted to foreign films, indies and experimental cinema. As we’ve grown to three screens in two locations, they continued to find fantastic films and inspired countless high school students and others to consider the power of movies.
“They’ve built a film culture in the region and even served up popcorn, ran the projectors, sold tickets, designed ads, written grants, cleaned gum off the seats and handled, with grace and humor, the thousand challenges of running an independent film theater. Their legacy will always be at the center of our organization.”
Deeply committed to the use of independent, alternate cultural spaces as laboratories for new ideas, Steve and DeDe have never hesitated to open the theater to powerful thinkers, including Ralph Nader and UN weapons inspector Scott Ritter. Most famously, perhaps, Andre Gregory and Wallace Shawn performed their play My Dinner With Andre before it became a cult classic, as filmed by Louis Malle.
“Upstate Films has thrived in no small part because of the financial support we have received from our members, our donors and through funders,” said DeDe Leiber. “That support has been led by the NYSCA, supplemented by the NEA, Arts Mid-Hudson, Dutchess County Tourism, local elected officials and many others. Upstate’s donors, plus the Frost Foundation, made it possible to build a second screen, add new seats to the theaters, convert to digital projection and sustain us through the pandemic. We owe our longevity and our success to generous community support in the Hudson Valley.”
Upstate Films has helped transform the town of Rhinebeck. The theater’s success helped blaze a trail for numerous organizations including the Rhinebeck Chamber Music Society, the Cocoon Theater and the Rhinebeck Performing Arts Center. Beyond finding the best new and restored films, the Upstate team participated in building film events, including the Hudson Valley Film Festivals, focused on the role of the screenwriter; the American New Wave series; and a festival of Shakespeare films. Steve and DeDe’s taste for challenging, enlightening cinema is appreciated far outside of Rhinebeck, and they have at times distributed films that they loved — the Oscar-nominated THE WEATHER UNDERGROUND, the beloved UNDER THE SUN, the Emmy-nominated FOLLOWING SEAN — out of a desire to make the films more readily available. The addition of the legendary Tinker Street Theater in 2010, at a time when many theaters nationally were struggling, helped save cinema in Woodstock. The organization has been a leader in arts-based education, launching, with FDR High School in Hyde Park in 1987, a seminal program that uses films and filmmakers to teach history and English in A.P. classes. The program continues to this day.
Allen Coulter chose to move to the area in large part due to Upstate Films. “As the Empire State Building is for New York City, or the Eiffel Tower for Paris, Upstate Films has become the focal point and symbol for Rhinebeck and surrounding communities,” said Coulter, who now serves as the organization’s vice president. “The reach of its artistic and cultural influence is testament to Dede and Steve’s astounding achievement.”
Upstate Films continues to provide online programs during the COVID-19 pandemic, and will be announcing additional virtual programs in early 2021. The theaters will re-open when it is safe to do so.