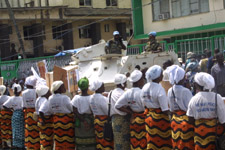 
An uplifting and engaging political documentary about Liberia’s women protestors and their struggle to depose a corrupt dictator.

In 1997, the former warlord Charles Taylor became president of Liberia. His ruling strategy was to keep the nation in a state of upheaval via constant, bloody civil war. Liberia’s women, having had enough, gathered together despite their religious differences and used whatever means they could think of to get the men of the country to stop fighting, including demonstrations in the marketplace, ancient curses, and a sex strike. Best Documentary award at 2008 Tribeca Film Festival.