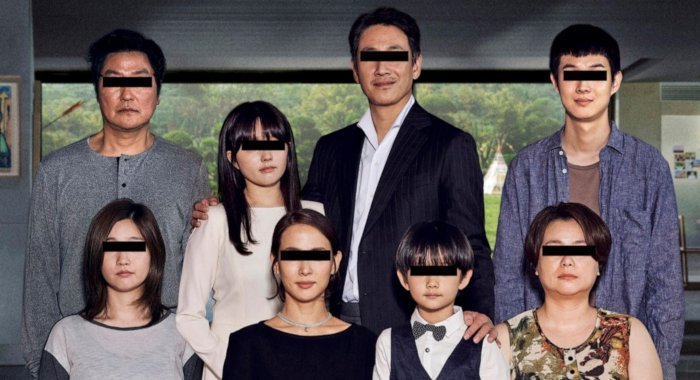 Academy Awards Big Winner (director, picture, screenplay, international)! Also took the Cannes Film Fest’s top prize, the Palme D’or, here’s a film its director calls “a comedy without clowns and a tragedy without villains,” a film that keeps us delightfully off balance as it mixes pathos and satire with thrills and drama as it nails the dichotomy between the struggling poor and the wildly rich.

A vertical story of class struggle — meet the moldy basement dwelling Kims: Ki-taek (Song Kang-ho) an unemployed husband and father; his hard-working wife Chung-sook (Chang Hyae-jin), his clever twenty-something daughter Ki-jung (Park So-dam), and his teenaged son Ki-woo (Choi Woo-shik). And then there’s the Park family living in a fabulous airy house with their teenage daughter Da-hye and terribly spoiled young son Da-song, who has suffered a childhood trauma that occasionally causes him to exhibit strange behavior. Due to an unexpected stroke of luck and some clever moves, Ki-woo is hired by the Parks to be the private English tutor of Da-hye, and soon figures out how to get his sister hired as an art therapist. Before long all the Kims are inside the Park’s bastion of privilege as the destinies of the two families become interlaced. As they become enmeshed, the film takes us on a fascinating ride that culminates in a powerful and utterly original outcome. In Korean with subtitles.