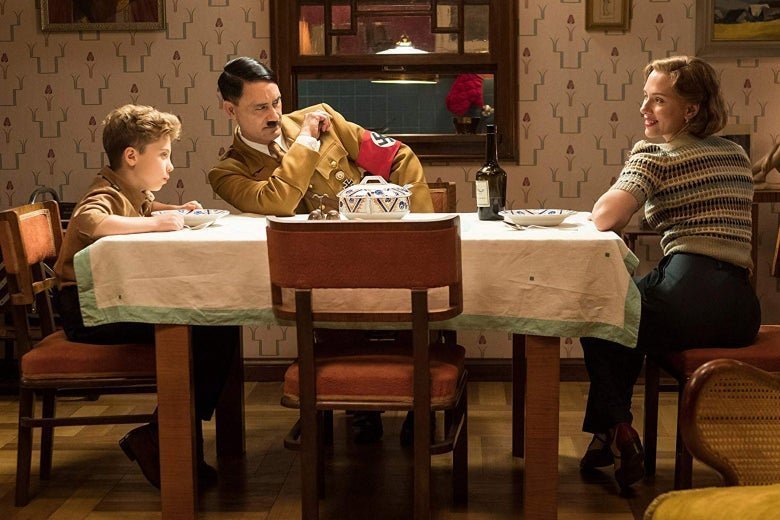 Winner of the Audience Award at this year’s Toronto International Film Festival… And yet, not everyone will like JoJo Rabbit, and at times you’ll wonder if you should. A coming-of-age comedy whose hero is a 10 year-old German boy during World War II who wants to be a Nazi/Adolf Hitler as comic relief? As it walks some precarious high wires, Taika Waititi’s latest (Boy, What We Do in the Shadows, Hunt for the Wilderpeople, Thor: Ragnarok) takes a risky premise and delivers a piece of grandly entertaining provocation.

It’s the final year of World War II, and Jojo Betzler (a wonderful Roman Griffin Davis) wants nothing more than to be “the bestest, most loyal little Nazi.” But in reality, he’s a sweet kid who earns the nickname “Jojo Rabbit” when he refuses to be violent at training camp. Goaded along by a devil on his shoulder, JoJo receives frequent visits from an imaginary friend — Adolph Hitler, portrayed by Waititi himself as a bumbling moron who offers cigarettes to kids and whose advice is always terrible. In the real world, JoJo’s friends consist of a strutting kids’ camp counselor (Sam Rockwell), his mom who’s working with the resistance (Scarlett Johansson), and a wide-eyed young boy called Yorki (Archie Yates).

The movie’s humor is deliberately broad, almost vaudevillian at times (The words “A Jew!” are followed by “God bless you,” and when one Nazi is ordered to round up a pack of German shepherds, he returns with a bunch of men in lambswool suits). But Waititi isn’t making light of Nazis. He’s mocking them, denying them the dignity of taking them — as distinct from the very real threat they pose — seriously. Nazis are dolts, he says, and isn’t it fun to watch as they lose the war? But there’s real gravity in JoJo, too. When JoJo finds a Jewish girl named Elsa (Thomasin McKenzie) hiding in his attic, he begins to question everything he’s been taught. “You’re not a Nazi” says Elsa as the two come to know one another. “You’re a 10-year-old boy who likes dressing up in a funny uniform.” By the time Allied troops converge on the city and Waititi delivers a huge, slow-motion battle scene, Jojo’s world has been turned upside down. Based on the book Caging Skies, JoJo Rabbit‘s attempt to balance history, tragedy, laughter, and style, make it something audiences will be talking about for the rest of 2019.