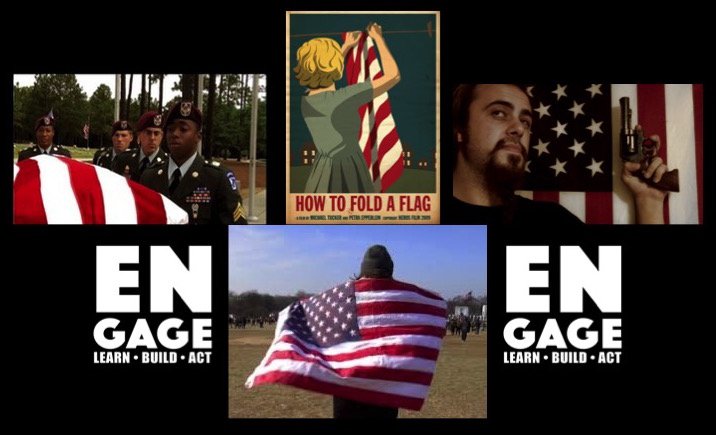 Sunday May 6th at 11am, join the Engage Film Series for a benefit screening of How to Fold a Flag, followed by a panel discussion on current U.S. military actions and their costs to the American public (read the article that inspired this event here). Proceeds will benefit the Costs of War Project (suggested donation $10).

How to Fold a Flag
(USA / 2011 / Directed by Michael Tucker & Petra Epperlein)
When the American flag is folded at a memorial service, each fold represents a virtue: liberty, unity, justice, valor, purity, sacrifice, honor, truth… But what do these virtues and other military ideals mean to soldiers who come home from war zones to a country largely isolated from, and at times indifferent to, their service? Tracking four soldiers from the same artillery unit back to their hometowns after serving in Iraq, How to Fold a Flag follows a cage fighter living under the shadow of a dishonorable discharge, a convenience store worker who expresses himself through heavy metal and sarcastic wit, an employee at a hog-processing plant who’s working toward a college degree through the GI Bill, and a Social Studies teacher running for Congress. As the men share time at home with those around them and find ways to define their wartime experience, the film makes palpable how war and its uncertainties become permanent parts of life for veterans and their families. Join us for a powerful film and an inspired discussion about current U.S. military practices at home and abroad. Unrated / 1 hr 25 mins.

“Through the engagement of significant numbers of concerned citizens, the status quo of war making might be reversed, and the rising tide of the US counterterror wars stemmed.” – Stephanie Savell