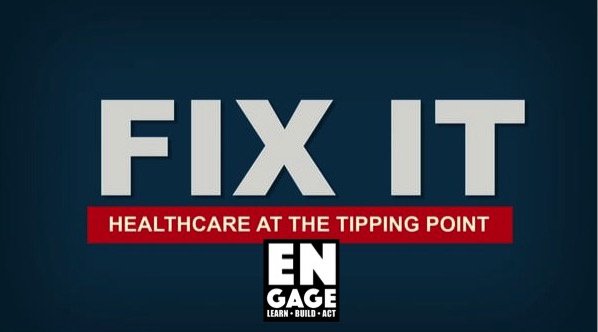 Join us Sunday, March 25th at 12:30 for a free screening of Fix It: Health Care at the Tipping Point. A program presented by the Healthcare Action team of the Dutchess County Progressive Action Alliance, the screening will be followed by a panel discussion anchored by Cathy Varunok, co-founder Miles of Hope; Elizabeth Armstrong, RN; Dr. Daniela Stokes, M.D.; and Eve Madalengoitia, DCPAA Healthcare Action Team. Donations taken at the door (suggested donation $10) will go to support Miles of Hope.

A comprehensive and timely documentary, Fix It investigates the issue of health care reform from multiple angles. Reaching across political and ideological divides, it features more than forty voices — including those of activists, health care policy experts, economists, physicians, nurses, patients, and business leaders. Collectively, their insights implicate a system which is operating in crisis mode, often failing the people it’s designed to protect. What can we do to fix it? Watch the film, learn about the New York Health Act — a campaign working on getting a single payer health insurance law passed in NY State, and join the discussion.

ENGAGE: Learn, Build, Act
The ENGAGE series presents selected social justice documentary screenings at Upstate Films. Each film in the series touches upon an issue of our time. And each screening is followed by a panel discussion where attendees have the opportunity to learn more from people directly impacted by the issue. What is more, audiences leave with a card listing 3-5 clear next steps for how to take action in their community.