“In its first five minutes Jaws grabs you somewhere beneath your sternum, and for nearly two hours it doesn’t let you go.” — Michael Sragow, Boston Globe, 1975

The story: One early summer night in a fictional New England summer resort town, a young girl (Susan Backlinie) goes out for a skinny-dip but never returns. After her death, police chief Martin Brody (Roy Scheider) wants to close the beaches. But Mayor Vaughn (Murray Hamilton), mindful of the lucrative tourist trade and the approaching July 4th holiday, refuses to put the island on a business-killing shark alert. When the great white foe dines on a few more victims, the Mayor orders local fishermen and a visiting ichthyologist (Robert Shaw & Richard Dreyfuss) to catch the culprit.

The production: Shot mostly on location on Martha’s Vineyard, the film had a troubled start. The art department’s mechanical sharks suffered malfunction after malfunction, leading Spielberg to mostly suggest the animal’s presence, employing an ominous, minimalist theme created by composer John Williams to indicate its impending appearance. While the theme and the film are both iconic today, production designer Joe Alves remembers that, as big as the film became, “it was actually a rather small movie. There were only half a dozen key people pushing to get it done. Then there was a preview screening in Long Beach, and we were deathly afraid that they were going to laugh at the shark… We had never heard the John Williams music. We had just heard the valves, and it was very mechanical. But when you had the music and the sound, they didn’t laugh. They screamed.” Its release in 1975 is now regarded as a watershed moment in motion picture history. Along with STAR WARS two years later, JAWS was pivotal in establishing the modern Hollywood business model. In 2001, it was selected by the Library of Congress for preservation in the US National Film Registry for its cultural, historical, and aesthetic significance. 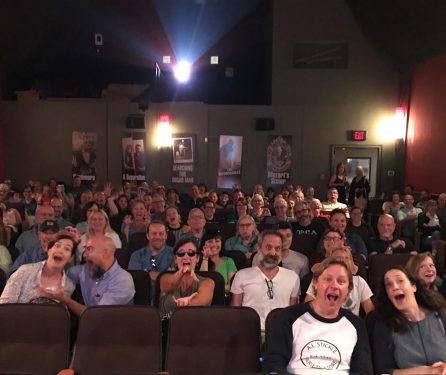