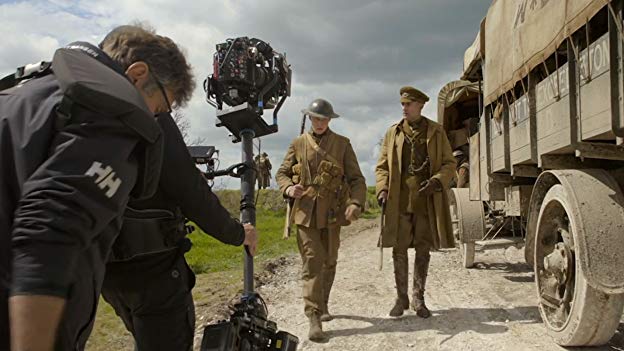 WWI, once considered the war to end all wars, is the setting for this immersive journey through the muck and mire as two young British soldiers are given a seemingly impossible mission.  10 Oscar Nominations!

Blake (Dean-Charles Chapman) and Schofield (George MacKay) are lance corporals and messengers who must cross enemy territory to deliver a message that will save hundreds of British soldiers, including Blake’s brother, from charging into a deadly German trap. These men, like the rest of their company, had been lulled into a false sense of security by what appears to have been a German retreat, and an expected “big push” from the Allied forces to clinch victory. Directed by Oscar-winning filmmaker Sam Mendes (Skyfall, American Beauty), and stunningly shot by Oscar-winning cinematographer Roger Deakins (Blade Runner 2049, Skyfall) in what appears to be one long take, this engrossing epic also stars Mark Strong, Andrew Scott, Richard Madden, Claire Duburcq, Colin Firth, and Benedict Cumberbatch.

[L]egendary cinematographer Roger Deakins (No Country for Old Men, Fargo, Blade Runner 2049) effectively drops the viewer in the center of the story and compels them to stay there, fully immersed in every muddy step, hunger pang, and rifle click.”  –   Leah Greenblatt, Entertainment Weekly